by rhondak
in Featured, National
0

Funeral services were held today at St. Patrick’s Church in Palm Beach Gardens, Florida, for Chief Warrant Officer Jonathan Farmer, who was killed in a suicide bomb attack in Syria on January 16, 2019, along with four other Green Berets.

Jonathan’s parents are active parishioners at St. Patrick’s. Alan Bowman, Choir Director at St. Patrick’s Church, said, “Jo Beth is one of our Eucharistic Ministers. I see her frequently in and out of the office throughout the week, and I think she takes the Eucharist to people in their homes as well.” Jo Beth is also active in prayer groups and Bible studies at St. Patrick’s.

“We learned the Ballad of the Green Beret and sang that for him. I couldn’t hear them singing, but I imagine that the Green Berets were singing along with us at the end of the mass,” said Choir director, Alan Bowman.

Monsignor told Palm Beach Christian Voice, “I baptized three of their children and at each of the baptisms I had a statuette of Jesus washing the feet of Peter, and it was maybe seven inches high and eight inches wide. Jon loved the example of God serving us as Jesus did Peter,” said Msgr. Birkle. 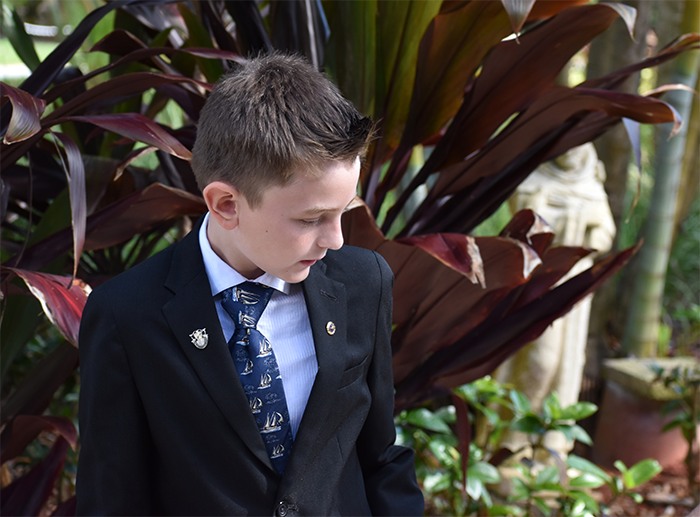 Msgr. addressed Jonathan’s oldest son and asked if he knew who the statue represented. Immediately his son answered, “Yes, Jesus and Peter.”

Monsignor ended his homily saying, “Okay, Jonathan’s going to have the last word,” and he asked the question, “What does the phrase mean, which is inscribed in stone in the National Archives building in Washington, D.C., ‘All that is past is prologue’? Could you give us from your vantage point now, very simply what does that mean?” He answered for Jonathan, saying, “That’s easy. It means brothers, sisters…you ain’t seen nothin’ yet.”

Jonathan’s father-in-law provided family anecdotes in the the first eulogy. Jon’s youngest brother, Andrew Farmer, spoke about growing up with Jonathan as well as stories of his service in the army. Jonathan’s best friend and a fellow Green Beret gave a moving eulogy, filled with stories of Jonathan’s passion for serving his country above all else.

Tabatha Farmer, Jonathan’s wife did not think she would be able to speak at the funeral but unexpectedly got up and gave a short eulogy, speaking about his service.

Shauna Chung, founder of Bless a Badge ministries, spoke to Jonathan’s family and several of the Green Berets who served with Jonathan. Jonathan’s brother, Andrew, and his father-in-law said that everything Jonathan Farmer did was to reflect God’s love to the people around him.

“The Green Berets in attendance said that Jon was a very faithful Christian man who wasn’t shy about his faith in God,” Shauna said. “They said that he wasn’t a Bible Thumper but when people asked him, ‘Why are you so nice to people, and why do you go out of your way to help people?’ Jonathan answered them, ‘Well, because of my love for God.'”

Outside the church property, Mark Donohue and his children, Reagan and Grant, as well as Mark’s sister, Jennifer Sommer, waived flags and sang patriotic songs in memory of Jonathan.

Mark Donohue said, “Jonathan went to the same high school my boys attend, but if none of that had been true and we lost a serviceman from our community we would have shown up because we think that is the right thing to do for someone who made the ultimate sacrifice for this country. Freedom’s not free. They protect our way of life and we wanted to take time out of our day to pay our respects and support the family.” Mark is one of the founders of Students for Life, a pro-life organization that reaches students at college campuses across the globe.